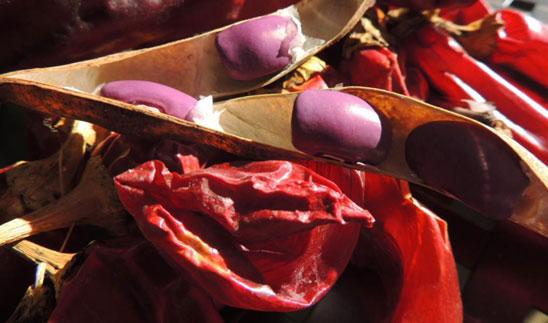 Previous research has shown that, once human remains were deposited in the site, burials and middens were sealed with an adobe layer that prevented disturbance (Brooks et. al., 1962; Brooks and Brooks, 1980). Skeletons discovered in this area include 7 children ranging in age from a few months to 5-yr-old. The burials included food offerings consisting of corn, beans, agave, pinon, and curcubits as well as necklaces of marine shells, belts, and wooden plaques with turquoise inlays (Brooks et. al., 1962). The objects from this part of the cave were dated to about 600 A.D. Additional burials of an adult and 1 infant were placed over the older tomb at some later date (Brooks et. al., 1962; Brooks and Brooks, 1978, 1980). Evidence of skeletal lesions in the human remains is apparent (D. Martin, pers. comm.).

Hohokam Indians. Teparies are one of the most heat and drought resistant crops in the world. The same adaptations that allow them to thrive in harsh desert conditions make them incredibly healthy, all while causing considerably less digestive discomfort and gassiness than other beans.

The 2015 harvest produced fewer beans due to the severe drought and there was considerable crop reduction because of insect damage. Our beans are grown organically using sustainable farming methods. Being organic limits the choice of pesticides - we used a pyrethrin (marigold extract) based pesticide with limited results. This year we produced Anasazi. Jacob's Cattle, Rio Zape and Tepary beans. They were planted in late April and harvested from August through October. They are available in 1 pound or 5 pound bags. Click on 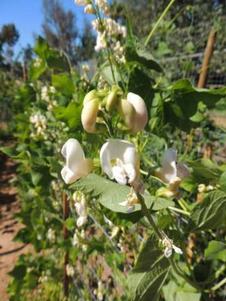 Native to the North American Southwest region, the Anasazi bean was named after the cliff-dwelling Native American people that inhabited the area now known as the four corners of Arizona, New Mexico, Colorado and Utah. The Anasazi bean is thought to have been a staple in the diet of the native people who lived in this region. While not much is known about the specific origins of the bean, evidence suggests that native people have been cultivating

"The first domesticated beans are of New World origin and were fist cultivated in Ancient Andes. The Jacob's Cattle bean is an heirloom of Prince Edward Island. Though no perfect facts point to its cultivated origins, myth and legend has it that it was cultivated by the Passamaquoddy Indians during the 17th Century. Shelling beans were a quintessential foundation of Native American agriculture. Jacob's Cattle shelling beans are one of hundreds of heirloom shelling bean varieties that are native to North America, though many have disappeared from the agricultural landscape. Jacob's Cattle shelling beans are a perfect example. They were once common and then went into obscurity as improved varieties became commonplace. The late 20th Century has brought a resurgence of heirloom beans and because of Jacob's Cattle's unique appearance and productive yields, it is becoming a relevant shelling bean once again."  See more at: 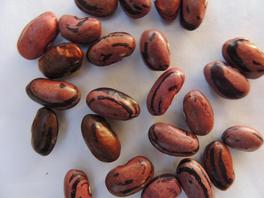 In addition to being a good source of fiber, Anasazi beans are also an excellent source of potassium, folic acid and iron. While dry beans are known to contain certain carbohydrates that cause flatulence, the Anasazi bean has been found to contain less than 25 percent of these complex carbohydrates, making them much easier on the digestive system. 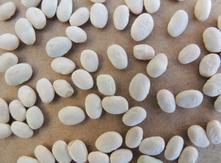 a much creamier texture than most beans. Many high end chefs are serving them these days. Because they are so dense, they require a longer cooking and should be soaked for at least 12 hours prior to use.

This bean is found amongst the Hopi today. The Rio Zape is referred to almost interchangeably as the Hopi Purple String Bean.

The Rio Zape bean that we know today may be the same Zuni bean donated in 1935, which in turn, may be the same bean that had been selected and cultivated in the Southwest at least 1,200 years ago. It’s fascinating to think of those purple beans sitting preserved in the cave of los Muertos Chiquitos for some thousand years, while generation after generation continued to grow the same bean on the outside of the cave until today." For more information see: 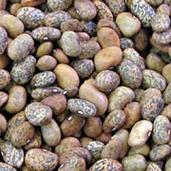 Beans are one of the most nutritionally complete foods available. Beans combined with grains lower cholesterol and reduce blood glucose to normal levels. (From Old Adobe Milling)

aromatics, such as onion, garlic, celery, carrot, ham or bacon.

and consuming them for more than 1,500 years

Rio Zape Beans are purple/brown beans with black crescent moon markings. Called "Maawiw'ngwu" in Hopi, or Hopi String Beans. They are traditionally dry farmed on the mesas of the Southwest.  This bean is similar in size and shape to the popular pinto bean. 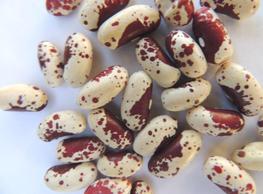 Tepary Beans (White, Gold, Blue Speckled) These varieties come from a Mayan folkrace from the highland areas of southern Mexico. They were first grown in the Southwest during the time of the

The Rio Zape has a creamy texture and a complex flavor with a hint of chocolate.  It was originally collected from the Zuni Pueblo, New Mexico in 1935. "The sealed cave on the Rio Zape outside of Durango was located in a low-humid area where the cave was only reached by handholds and footholds. The cave contained the remains of seven young children (hence the name, la cueva de los Muertos Chiquitos, or the cave of the dead little ones). The children were buried with, among other things, food offerings.

Anazasi Beans, sometimes referred to as Aztec or Cave beans, are typically small, kidney-shaped beans that are instantly identifiable by their unique color. A bright, multicolored bean, the Anasazi possesses a deep shade of red splashed with a creamy white. Due to their distinctive pattern, Anasazi beans are often thought to be a predecessor of other beans found in the pinto family.

Tepary beans have more protein content (23–30%) than common beans such as pinto, kidney, and navy. They have higher fiber and a lower glycemic index (41-44) as well as higher levels of oil, calcium, iron, magnesium, zinc, phosphorus, and potassium. They are lower in polyunsaturated fat and in the anti-enzymatic compounds which make common beans hard to digest). A high fiber food, they digest slowly providing sustained energy making them a great food for athletes, dieters and diabetics.

It is the flavor and texture of tepary beans,which is unique to them. They have a nutty-sweet flavor and

Jacob's Cattle Beans have a fruity flavor. They are rich and nutty with a consistency that is dense and meaty. They hold their shape under long cooking, and stand up well to plenty of seasoning. Use in baked beans, cassoulets and soups.

The Anasazi bean has a mild, sweet flavor with a slightly mealy texture, making it ideal for Latin, Mexican and Native American dishes. Known to cook much faster than ordinary pinto beans, Anasazi beans are often used to replace pinto beans in a variety of dishes including chili, soup and popular Latin dishes such as chalupas, nachos and refried beans. They must be stored in a cool, dry place until they are ready for use. Their sweet flavor pairs well with hot chiles, cilantro and lime. Try them in your next batch of chili. For more flavor, simmer the beans in broth instead of water and/or add coarsely chopped 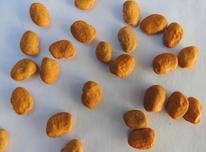 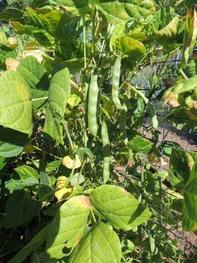