Here are the certified organic beans that are available from our farm: 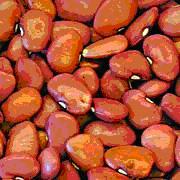 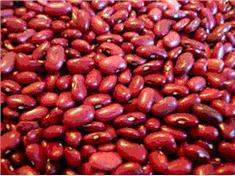 ​slashes. The Rio Zape, also known as the Hopi String Bean, has a creamy texture and a complex flavor with a hint of chocolate. 'Rio Zape' can be used as you would standard Pinto beans except, even served alone, the difference in flavor is quite

Anazasi beans, sometimes referred to as Aztec or Cave beans, are typically small, kidney-shaped beans that are instantly identifiable by their unique color. A bright, multicolored bean, the Anasazi possesses a deep shade of red splashed with a creamy white. Due to their distinctive pattern, Anasazi beans are often thought to be a predecessor of other beans found in the pinto family.

Native to the North American Southwest region, the Anasazi bean was named after the cliff-dwelling Native American people that inhabited the area now known as the four corners of Arizona, New Mexico, Colorado and Utah. The Anasazi bean is thought to have been a staple in the diet of the native people who lived in this region. While not much is known about the specific origins of the bean, evidence suggests that native people have been cultivating and consuming them for more than 1,500 years.

​The Anasazi bean has a mild, sweet flavor with a slightly mealy texture, making it ideal for Latin, Mexican and Native American dishes. Similar to other dry beans, Anasazi beans must be stored in a cool, dry place until they are ready for use. These reddish-brown beans with white "painted horse" markings make a great substitute for pinto beans. They have a sweet flavor that pairs well with hot chiles, cilantro and lime. Try them in your next batch of chili. For more flavor, simmer the beans in broth instead of water and/or add coarsely chopped aromatics, such as onion, garlic, celery, carrot, ham or bacon.

Known to cook much faster than ordinary pinto beans, Anasazi beans are often used to replace pinto beans in a variety of dishes including chili, soup and popular Latin dishes such as chalupas, nachos and refried beans.

In addition to being a good source of fiber, Anasazi beans are also an excellent source of potassium, folic acid and iron. While dry beans are known to contain certain carbohydrates that cause flatulence, the Anasazi bean has been found to contain less than 25 percent of these complex carbohydrates, making them much easier on the digestive system.

Beans are one of the most nutritionally complete foods available. Beans, combined with grains, lower cholesterol and reduce blood glucose to normal levels.

The Kashmir Thin Skin Bean has an oily silky feel to the dry bean. They are a very nice mauve-purple color and are reputed to cook up extremely tender. Beans of course are not native to India, nevertheless, they are now a very popular foodstuff and they are grown and eaten in great quantities there. India has many varieties which have originated there and are now unique to Indian cuisine, the Kashmir Thin Skin being one of them! A bean grower remarked, “I just got through eating a couple of bowls of these beans, and boy were they good! They had a good rich beany flavor.”

​obvious. The beans are a violet-purple color with slashes of dark burgundy. The dark color is retained during cooking and produces a nice, dark "gravy" all on its own. Picked young, the pods make good string beans

​Undoubtedly the most delicious Lima beans in North America, these heirloom varieties came into the Southwest around 1000 AD. Although known in farming literature since the 1930’s as the Hopi lima beans, these were once cultivated by at least eight Southwestern cultures, including Pimas and Anglos from the 1930s through the 1980s. Other than being grown by some heirloom seed gardeners on a small scale, these beans are now farmed almost exclusively on the Hopi reservation. The beans are eaten ceremonially as sprouts in underground kivas by initiated clan members, or the dried seeds are boiled and baked.

The broad, flat beans are mottled and come in various colors, including:

Hopi red, Pala hatiko. Selected by the late Hope artist Fred Kabotie, these limas are prolific indeterminate viners. Tasty and meaty, the beans are either a solid red, or streaked with black. The beans taste creamy and fruity with a hint of chocolate. Endangered.

Hopi yellow, Sikya hatiko. Varying in color from deep yellow to dark orange with black mottling, this bean is less common among the Hopi than its gray counterpart. During spring ceremonies, the beans are sprouted, then attached to katsina dolls, rattles, and bows to be given to children. As with gray limas, the sprouts are chopped, boiled and then added to light soup broths as a fasting-breaking delicacy. These beans are flavorful with a nutty taste. Endangered.

The bean was once cultivated by the Tewa, Havasupai, Southern Tiwa, Gila River Pima, Yuma and Navajo Ramah tribes. The Hopi and Tewa are the last to grow it on any scale larger than garden plots. Because Hopi and Tewa production is under traditional dry farming conditions that use rainfall or runoff but not pumped groundwater, they are sustainably grown even now. Even though they are important for the Bean Dance (powamu) ceremony of the Hopi, surveys show that fewer and fewer Hopi are farming since a drought began 11 years ago, and that nearly half of all heirloom vegetable varieties have been lost from Hopi fields and gardens since the Dust Bowl. The area in cultivation of these beans appears to be in decline in the fields of some 75 Hopi families interviewed this decade.

These heirloom beans have drought and heat resistance, and so are well adapted to arid climates and tolerant of salt and alkaline soils, Their resistance to root knot nematodes historically saved the southern California lima bean industry from dying due to this pest. They are well adapted to sustainable production with a minimum of spring water, or dry-farmed using rainfall and runoff in sand dune fields. All the surviving heirlooms listed above are at least threatened and several merit endangered status.

The late Hopi tribal chairman, Ferrell Secakuku, spent the last years of his life promoting the revival of these beans among his own people before his untimely death in the summer of 2007. These beans have been boarded to the US Ark of Taste in memory of Ferrell Secakuku, that it may inspire younger Hopi to safeguard and renew Lima bean production among their clans.

Hopi, Tewa and Pima farmers may raise these varieties for ceremonial and home use. Pima growers, including the Perry DeLo family are mostly located around Sacaton, Arizona​

​Good Mother Stallard Beans have a wonderful, nutty, rich meaty flavor. They are one of the few dry beans that retains its colors through cooking. Named for Carrie Belle Stallard of Wise County, Virginia, this family heirloom dates to at least the 1930s. Many cooks list this as their favorite bean. It is great for soups, superior in baked beans, excellent for cold bean salads. or just as a side dish with a simple dressing.

The beautiful legume offers a rich, earthy flavor when standing on its own. The thick skin holds the bean’s football shape and unique markings after being cooked. Good Mother Stallard is dense and nutty with a creamy texture. Chefs highly recommend this variety for the hearty pot liquor.

Stand alone as a pot of beans, smash them with a little Olive Oil and Garlic, chill them and add to leftovers or sauteed veggies - all are good. 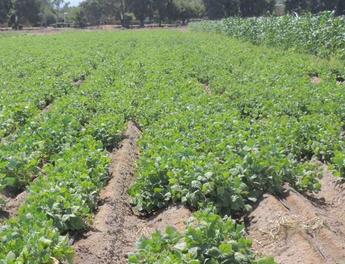 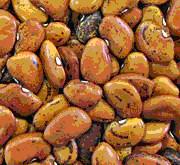 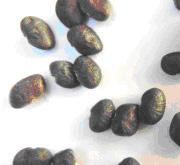 ​six-inch, greenish-purple pods. These small attractive beans are dried before consumed, and have a delicious rich flavor. 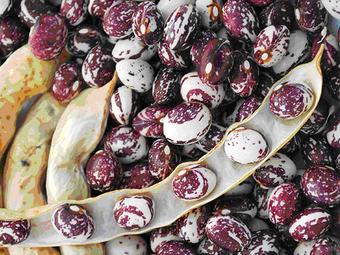 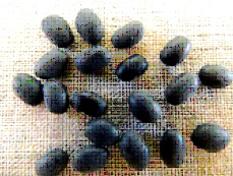 ​over the infamous "Trail of Tears" that left so many dead and suffering. [Black Valentine]  This prolific variety is good as a snap or dry bean and has shiny, black beans, In the face of its poignantly dismal history, the shiny, jet-black seeds are used with pride in many traditional American Indian dishes. The seeds are encased in

​Tepary Beans are part of the Slow Food Ark of Taste. They come from the highland areas of southern Mexico (our white teparies come from a Mayan folkrace). They are one of the most heat and drought resistant crops in the world and have a nutty-sweet flavor and a much creamier texture than most beans.

The namesake of both the brown and the white Tepary bean is pawi, the Papago Indian word for bean, and further, t'pawi—meaning ‘it is a bean.' The Tepary plant is adapted to the dry conditions of the American southwest; it is drought-resistant and able to mature on a single irrigation or thunderstorm downpour.

The plant also holds up well against disease. Before arriving on US soil, the Tepary bean had a rich cultural history that stretched back more than six thousand years in the arid landscape of northern Mexico.

Both the brown and the white versions of the Tepary have a rich and nutty flavor. The beans are shelled and dried before use and are cooked into many traditional southwestern stews and casserole-like dishes as well as a ground Pinole. The Hopi Indians use the white Tepary beans to break a traditional fast by placing the beans under the hot sand and cooking them with salt water.The beans vary in color and shape; they are oval, flattish or round and vary between a fleshly white, speckled brown, reddish-brown, or purplish-brown color. For their very small size they offer an exceptional nutritional value.  They have more protein content (23–30%) than common beans and a higher fiber and a lower glycemic index (41-44) as well as higher levels of oil, calcium, iron, magnesium, zinc, phosphorus, and potassium. They are lower in polyunsaturated fat and in the anti-enzymatic compounds which make common beans hard to digest. Tepary beans contain soluble fiber helpful in controlling cholesterol and diabetes. They can be cooked for hours and not fall apart. They take longer to cook than regular beans and will be al dente when cooked.

​The Rio Zape bean was unearthed in the ruins of the Anasazi cliff–dwelling people in the American southwest, and collected from the Zuni Pueblo, New Mexico in 1935. Also It is said that this bean was unearthed at a prominent archaeological site--a sealed cliff tomb of the Anasazi tribe in Durango, Mexico, where the beans, along with numerous other food offerings, left at the site-- were dated back to 600 AD. [Rio Zape Bean]  This bean is similar in size and shape to the popular pinto bean and is purple with dark burgundy

Rio Del Rey is an organic family farm located on 9 acres in Valley Center, of North San Diego County. Begun in 2010, we specialize in growing dry heirloom beans and restoring ancient bean landraces while contributing to university research to improve their unique qualities. Our beans are free of pesticides and GMOs, and are hand harvested, hand sorted and produced in small lots to preserve their quality and flavor. 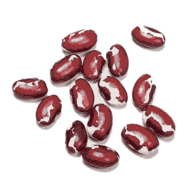 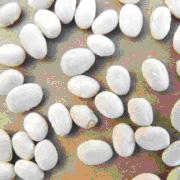 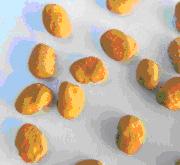 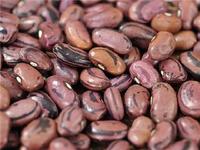