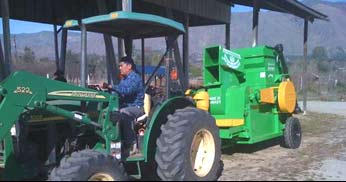 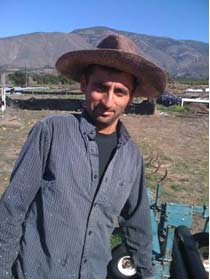 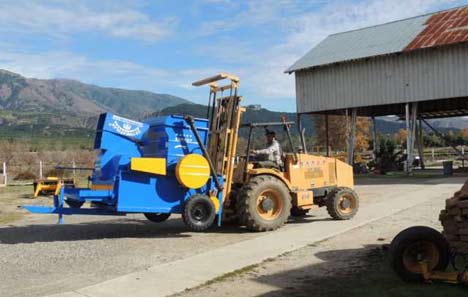 In operation in a Greek oat field

We have completed the process of forming our business, called Rio Del Rey.  The name refers to the river flowing adjacent to the bean fields in Pauma Valley. Starting a business is a risky enterprise. But I have the full confidence that we will have fun discovering a whole new world of possibilities and good people. Being retired has an advantage- regardless of the outcome, this new venture will be another step in figuring out what I’d like to do when I grow up!

My trip to Turkey this month proved that small technologies and innovation are alive and well. When I discussed my nascent plan for farming heirloom beans with Steve Temple at UC Davis in August, he pointed out that the greatest barrier for the small bean farmer comes in the cost of a bean threshing machine, because no small machines had been made in the US for many years. My earlier research had confirmed this, and lingering at the back of my mind was the impending harvest of 4 acres of beans. Imagine freeing the beans by hand labor! (We do this now for the 44 experimental beans and I can assure you shelling thousands of beans is no pool party!)

The only small scale threshers on the market were those made in China and Italy, and since I had little confidence in dealing with China, and did not have the capital funds for a $47,000 machine from Italy, I intensified my search.  Fortunately, I found a company in Konya, Turkey, where reasonably priced machines were manufactured from an original design by its founder, nearly 30 years ago. The machines are used all over Greece, Turkey, and northern Africa.

I contacted them and purchased two machines. They run off the PTO drive of a tractor, and met my desires for a more sustainable use of energy, rather than buying diesel or electrically powered models. The machines will be delivered to the Port of Los Angeles on November 25. In the meantime all the bean plants have been harvested and placed in large avocado bins, awaiting threshing and cleaning.

So while on vacation in Turkey in October, My wife Chris and I flew to Konya for a day to meet the owners, Osman and his son Nuri, and the workers at their thresher factory. It astonished me that the machines were completely manufactured there using large rolls of steel and steel bars, formed by milling, bending, and welding into the threshers. Only the wheels and tires were outsourced. Even the painting was done there. It was a great visit, demonstrating to me the high quality of the product and the integrity of the owners. I also was shown how to operate the thresher and diagnose any problems that might occur during its operation. 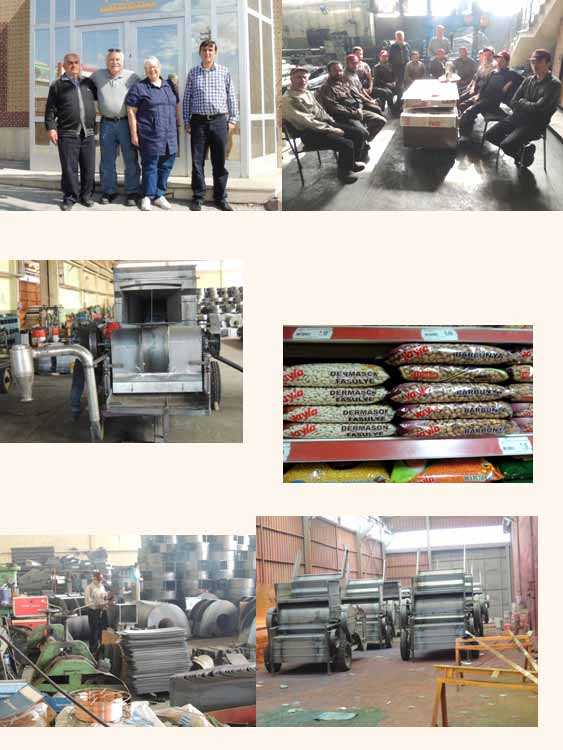 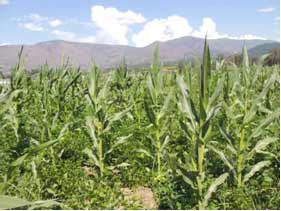 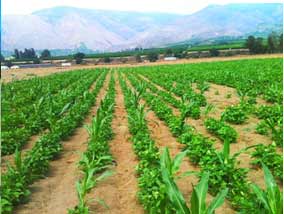 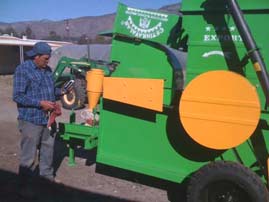 use daily for picking oranges, we finally were able to test out the new Bean Thresher from Turkey. Our first task was to thoroughly grease all the moving parts. At the left you see my partner checking out a tube of grease. We used almost 9 of these to lubricate the thresher.

We discovered that most of the grease nipples had been closed off from their reaction with the salt air during their journey across the Mediterranean, Atlantic, and Pacific. We used a small diameter wire to open them.

we moved them to one of the storage buildings, out of sight of passers by, who might be tempted to strip the metal from them. 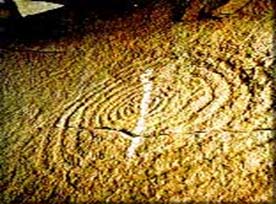 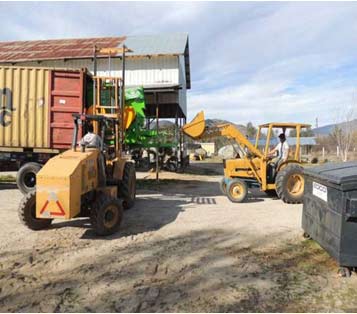 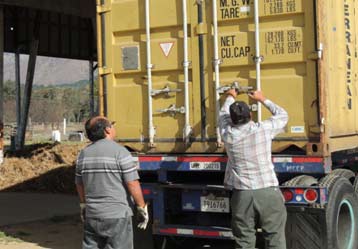 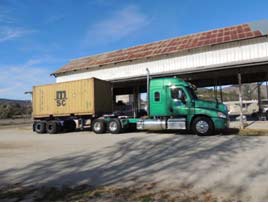 The day began warm with a gentle breeze blowing in from the East- a mild Santa Ana Wind- the last harbinger of Indian summer with winter less than 6 days away. The farm was already busy with members of the Somali Bantu community hoeing the soil in preparation for the cool weather vegetables- kale, chard, cabbage and more. But the truck hauling the container with our threshers was lost somewhere in Pauma Valley. Fortunately, he had pulled in to the parking lot of the town center and I led him like a scout leading the covered wagons, to the farm.

I was surprised to see a metal shipping container- I had fantasized a large wooden crate that would yield to the crow bar I had dutifully brought along. Little did I know! 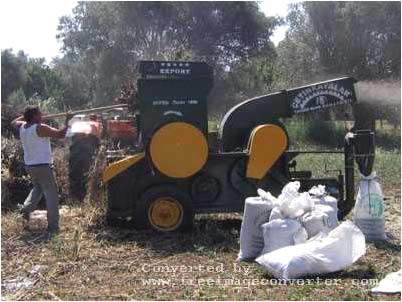 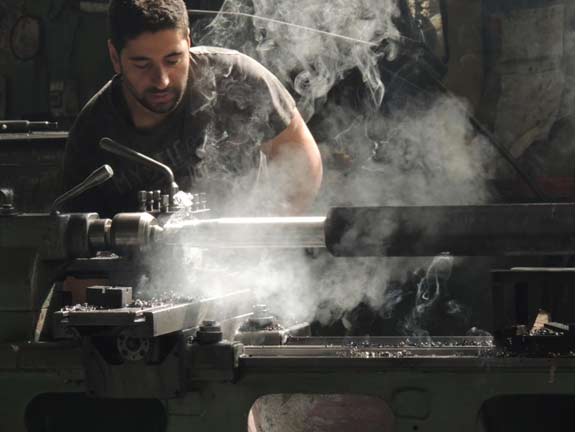 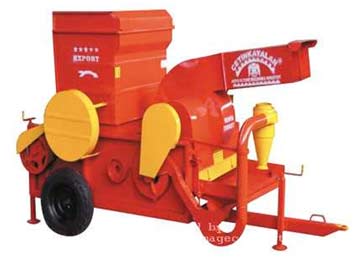 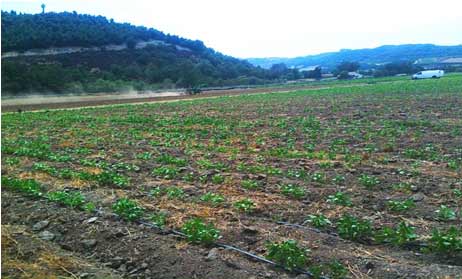 All of the beans are watered using drip irrigation. So far there have been no problems with insects or rodents. The summer has been cool here, acting more like the weather we have in late May with fog in the morning, and temperatures in the mid 80’s.

These two pictures were taken August 18, of the Anasazi beans and corn. The right picture shows how the beans use the corn as a pole. Providing more room for growth, produces more beans. The time from planting to harvest for Anasazi beans is 85-95 days. 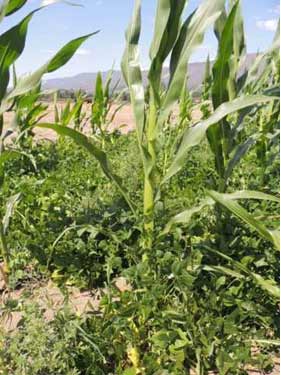 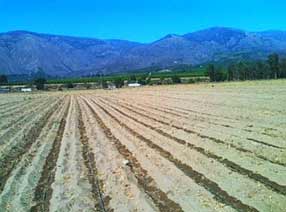 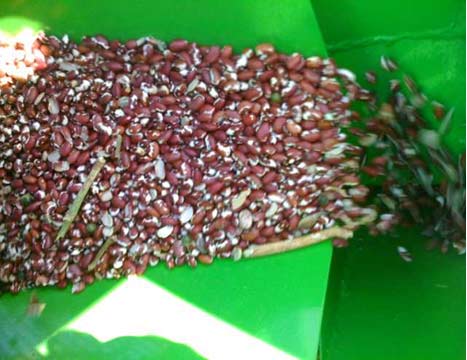 A thresher before being painted, either red,

green, or blue.  I ordered blue and green. 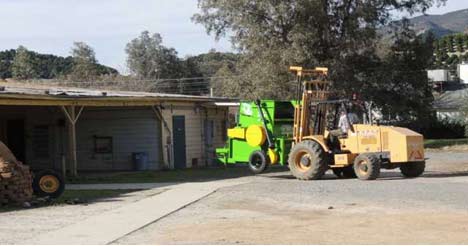 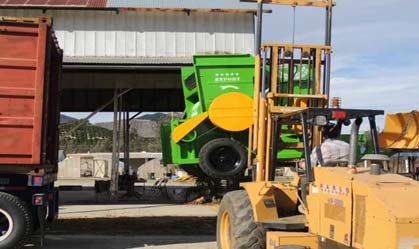 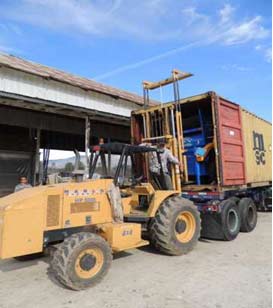 We are also finishing the test plot results for the 44 varieties we grew this year. So far, the results indicate yields anywhere between 1600- 2200 pounds per acre. Another surprise was the high productivity of the many varieties of tepary beans with the blue speckled bean far out distancing all others. The real plus here is the low water requirement.

Finished and ready for shipping 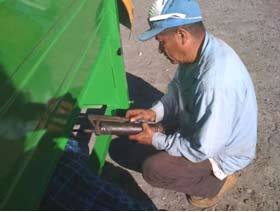 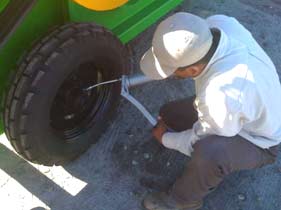 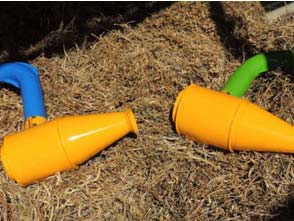 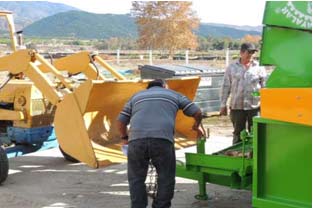 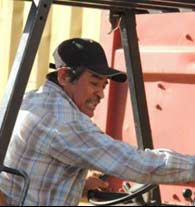 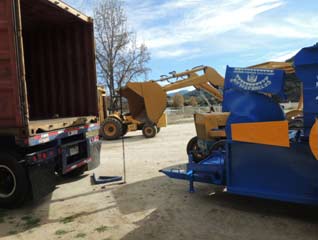 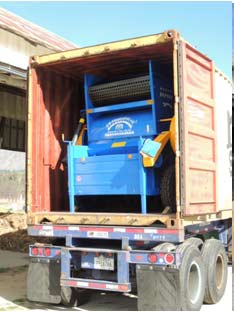 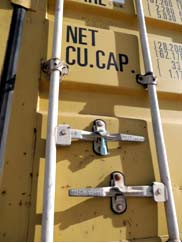 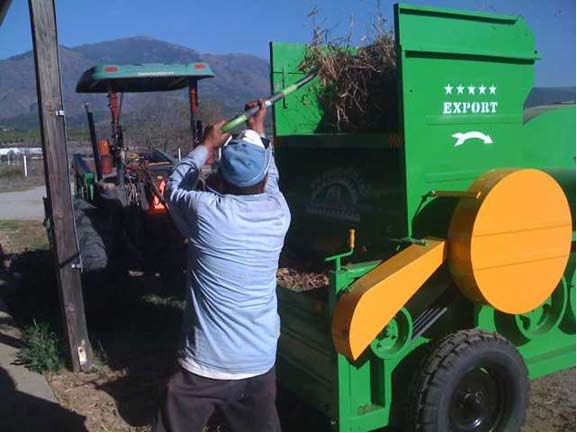